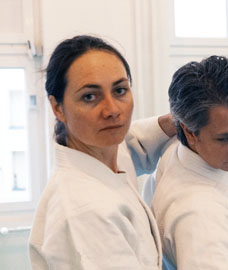 Interested in the combination of the Philosophy and Movements of Aikido and curious to experience those quick and swift movements I had seen in some videos before, I entered in 2013 the DOJO SÜDSTERN. I did not know anything about the other Dojos in Berlin, I just picked it out as it was in my neighbourhood. As soon as I entered, I felt: This is the place for me.
Jean-Marie Milleville asked me if I had already practiced some martial arts. Well, I was training Capoeira for some years before, but at that time I was much more into Contact Impro and BMC. “O that’s Great!” he said, “Then you have already the awareness of your own body movements and of contact in motion!”
Soon I understood that this is indeed one of his specific themes: His Aikido is not about the combat, about being the strongest and being able to hurt the most (with those typical aikido hurting moves). On the contrary! It’s the COMMUNICATION between bodies that is interesting to study more, instead of the confrontation between two. His Aikido opens up the world of moving along with pressure (as the attack is still coming and you still need to be able to handle this), but without blocking yourself nor the opponent. “You have a problem. OK. Your hand is grabbed. OK. But isn’t the rest of your body able to move?” We learn to be conscious of every second: When does the attack begin? Who reacts to what? What do you offer, how do you react to it? What is your position? How do you conduct yourself towards the other? So suddenly the movements are mirroring indeed the philosophy of “going together, using the energy of life”: Ai – Ki – Do.
Come by! 🙂