”It’s not an improvisation, it’s a reflection.”

On Mindful Training: An Interview with Christian Tissier 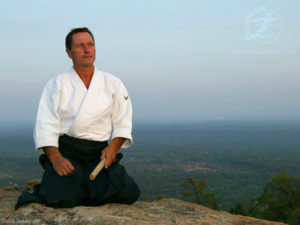 In Buenos Aires Christian Tissier answered questions about diverse Aikido-related topics, among them: Aikido’s future, Yamaguchi Sensei’s (1924-1996) quality of instruction, the problem with ‘chi’ as a chimera, and the importance of studying technique for experiencing fluid movement. The interview was conducted in December 2010 by Mario Lorenzo (Aikikai Argentina) and translated simultaneously by Jorge Rojo (Aikikai Chile). It has been edited by Daniel Fisher and reprinted by the Aikido Dojo am Südstern (Berlin), with Tissier’s kind permission.

Mario Lorenzo: How do you see Aikido evolving in the future?

It’s different now than when I started, nowadays there are many other possibilities for them. When we started we found something magical in oriental culture, but we only had Judo, Karate and Aikido. We need to involve more people between the ages of 18 and 30. Otherwise the average age of people attending the seminars is going to be between 40 and 45 years, and this will help to determine the Aikido we will practice.

Another thing important for shaping the future of Aikido is its uncertain reception in larger countries like China and India. There are billions of people living there, but what are their interests? In China they practice Shaolin Kung Fu, and in India Yoga and other exercises, but how many would be interested in Aikido? We don’t know. It could be as many as 100,000, even 200,000, or perhaps no one. We don’t know what will happen in the next 20 years. In France there are 70,000 practicing Aikidokas, if in China there were as many as 300,000, how would these people affect Aikido? Nowadays, a regular class has one teacher for every twenty students. If there were 1,000 students, what would the teaching methods be?

From a technical point of view, to which aspect do you think Aikido will gravitate: physical condition, speed or technique? 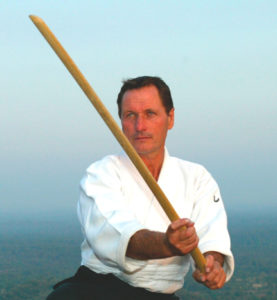 Diversity is the strength of Aikido. There are people who practice Aikido precisely because it’s not too physically demanding. Many of these people couldn’t practice another sport. There are others who have worked physically before and for them that aim is realized in Aikido. I’m almost 60 and I feel like a sportsman. I’m not saying I practice a physically demanding Aikido, but I feel like somebody who has done sports his whole life. We are interested in keeping an aspect of the practice based on physical work.

A short time ago I went to Amsterdam with the Doshu, we are the same age. The Aikido he demonstrated was extensive, fast and precise, and he did so with all the characteristics of a sportsman.

In South America we can see that those who place too much emphasis on ‘chi’ in their practice are not technically serious. Do you see this in other countries? And what do you think of Watanabe Sensei’s “no touch Aikido”?

They are two different things. On the one hand there are people who talk about chi, and on the other there are people who practice Aikido like Sensei Watanabe. He developed something in which he is especially interested: It isn’t work with chi, but one of anticipation, sensing, whether or not you like it, whether or not it works. It works when you know the code, but martially it doesn’t. Having been in Japan, I worked a lot with him; Watanabe wasn’t like this before. He is a physically solid practitionerwho wanted to develop something different. I think that if I were head of an examination panel, I wouldn’t take what he produces.

Now, people around the world who talk about and make constant reference to chi are looking for something to justify their lack of technique. Because we all have chi, everything is chi [opening his arms], the problem with chi is its fluency. How does chi flow? When there is no blockage. When somebody is doing a technique and doesn’t handle it well, this person doesn’t have an unblocked body. The objective of the technical aspect of the sport is to unlock every part of the body where there might exist a blockage. Someone who performs an exercise with stiff shoulders will not experience a real flow of chi.

Being the most important teacher in spreading Aikido around the world, how is your relationship with other Japanese teachers?

Our relationship is really good. In fact, I’m a product of the Aikikai; I arrived there when I was young and worked there… I think that they consider me one of their own, but as an ambassador, too, as a foreigner.

According to the conversations we had with the previous Doshu and with the current one, I am for them an Occidental who knows the rules and understands them. I’m part of Aikikai’s image. I think that it’s because I was faithful to the teaching I received. Even when Aikido has the personal side and everyone develops in his or her own way, I have the feeling of being part of the same family. My generation is the one that has most influenced Aikikai so far. This generation includes teachers like Yasuno, Yokota, Osawa (who is younger), Miyamoto, Shibata, and Endo (who is a little older). There’s another generation before mine: Tamura Sensei, Yamada Sensei, Tada Sensei, and another, younger generation, which I don’t know personally.

In your seminars you pay attention to “points” and “axes”. Do these concepts come from your personal development of Aikido? In what way has Yamaguchi Sensei influenced your technique?

My teaching method is personal, it comes from the analysis I’ve done of what I have learned particularly from Yamaguchi Sensei, who was a model of purity. Our occidental spirit shows the Japanese model in a different way. Often Japanese people don’t know how to explain these subjects and their explanation may still seem strange. Some are pedagogically good, but their method doesn’t come from speech or from a moving analysis, and when they are asked why they do something a certain way, they only say it is like that, they say it is Japanese tradition.

What I find wonderful about Yamaguchi Sensei is that he always had answers to all the questions. He had for each subject a reflection that was highly intelligent in the field of Aikido. I had heard many of these thoughts before, but I couldn’t understand them back then. Even nowadays when I watch a video, I see things I couldn’t see before, I didn’t have the eyes to see them. And that is simply because Yamaguchi Sensei was quite advanced. People who attended his classes knew everything intuitively. All of my generation has been strongly influenced by him.

What are your memories and feelings from your experience with Yamaguchi Sensei?

I still carry many feelings; when I watch a video or see someone doing a special movement, I know exactly what is going on. His movements were characteristically fast, and his strength in action, it wasn’t a natural strength. Yamaguchi Sensei was a person who weighed 65 kg, and whenever he started an action, you didn’t feel any struggle, he showed precision and at the same time he produced a series of unbalancing movements.

He was a person who from the moment you made contact with him controlled your center. He made fluid movements and when he made the decision to act, it was like an explosion, a crumbling force; we were like a building going down, he broke us. I never had the bad feeling of being pushed or pulled. It was a nice sensation, clear, very technical.

I have different memories of the other teachers from whom I learned, but with them I sensed a bit of a fight. Whenever I forced a movement with my arm, the more I would have to protect myself, because it hurt, and whenever I further protected myself, I would exert greater force. We learn from this too, but that was not the feeling I had with the master Yamaguchi.

Do you have any other reflection on Aikido pedagogy?

We can draw an analogy with people who perform music or dance. There are people who are gifted for these arts, but if they really want to be good, they have to learn the techniques of these arts. Because it’s not an improvisation, it’s a reflection.

For example, in ballet a professional ballet dancer is not the one who decides what to do. This is determined by the play and the dancer has to do all the work, not only what he likes. He learns the technique and behind it there’s a discipline.

There are people who are physically gifted for Aikido, but that is not enough. We have to learn and analyse and reflect. When we do these things, we can then distinguish different possibilities: „Did we show a logical gesture or one which somehow shows ‘parasites’?” “Is it an exaggerated gesture or is it pure?” “Is the movement aesthetic or is it alive?”

I know many people who have practiced Aikido for 20 or 30 years, but they’ve become bored with it. If we were able to identify two or three technical details, our enthusiasm would make itself felt. Sometimes it is necessary to reorient the practice. Our role as teachers is to maintain people’s enthusiasm, even our own.

In Aikido, when it is said “Ikkyo Issho” („Do ikkyo all your life“), we ask ourselves: “But which ikkyo?” The same one as practiced some time ago? Ikkyo has to evolve, ikkyo is necessary to further our comprehension and sensibility. We shouldn’t say: “Ikkyo is like this and nothing has to change.”

At your level, in your research, is there a technical doubt?

They are not those kinds of doubts. I come back to what I was saying before. When we practice, we sometimes do something we didn’t know we were capable of doing, and we realize that this is a new, economic way of doing it. So, if we continue working a little more, we will create something a little different, but it’s not that we wake up one morning and discover something new.

Doubts make us go on, doubt is something specific to Budo, because the more we improve in something, especially in a martial system, the more we realize how weak we are. So we don’t feel like facing it and we do it only if it is necessary. Doubt helps us to preserve ourselves; only in an act of stupidity does one enter a bar and start a fight. Anyone who has learned something from the field of martial arts can only doubt it for its weakness. He is conscious of what it really is.